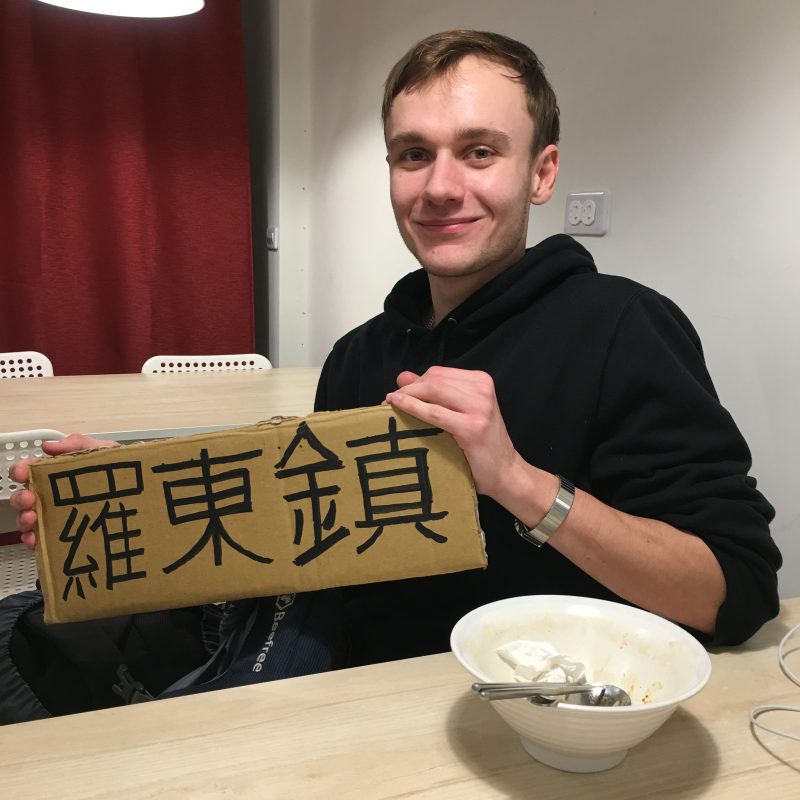 ( I was writing this ‘diary’ on FB, but it got too long so I decided to post here on my website. Have no idea that this article should be in which category, so I created a new one ‘Nita Talk’ 😃)

After sending out my application, it was around 3 pm, I rode my bike to HuiXin vegetarian/ vegan restaurant. When I parked my bike, I could see someone with a big backpack standing in front of the counter, talking to the clerk.

I was thinking ‘ Is he/she a foreigner?’
I went inside and asked him if he needed help to order.  ‘It would be great!’

After confirming he is a vegan or vegetarian, he said he would like to have noodles with soup and didn’t mind if it was starchy. Then I ordered the top 1 dish in this restaurant, Da Lu Mian (noodles), and Hong You Chao Shou (dumplings)  with medium spicy.

Pascal is from Germany; lives in Berlin currently. He told me Berlin is the best vegan city in Europe! (I thought it might be London.) But when I visited Berlin 6 years ago, I wasn’t a vegetarian yet so I didn’t notice that. Hope in the near future, I can go back to Germany one day! Both of us agreed that after becoming vegan/ vegetarian, it’s so fun to look for restaurants!😄

Pascal’s father is from Krakow. ‘ That’s the first city I visited after I stopped eating meat! (Normally we cooked at home at that time when I was in Denmark.) And it’s my first time to search for vegan restaurants before traveling, and pin them on my map!! (Normally I don’t use internet when I travel overseas.)’  (By the way, Krakow is a beautiful city and there are some vegan restaurants. I’ll sort them out soon.)

He travels in Taiwan now and came to LuoDong by hitchhiking. After waiting for 40 minutes beside a non main street, a driver picked him up; neither the couple in the car spoke English, but they were so willing to help.

N: Then how did they know where you wanted to go?

OMG! It’s traditional Chinese characters! His handwriting is quite good! It took him about 10 minutes to write these three words.

In Germany, except Christmas markets and Oktoberfest, there are no markets like the night markets here in Taiwan and everyday!

Before I showed him around LuoDong night market, I took him to my friend’s hotel to put down his back pack for a while. We were too full so we just ate peanut ice cream wrap which is the traditional local food in Yilan!!

My original plan before leaving home was eating in the restaurant and went to the library to return books. There wouldn’t be any one-time use products so I didn’t bring any reusable containers (And also wore very weird and ugly because I didn’t expect to see or meet anyone. ) But I was wrong!! We went to the night market!

What made me ashamed was when the booth owner was going to put Pascal’s wrap in a plastic bag, he immediately said he didn’t need the bag and reached his bare hand for that.

N: But the ice cream might melt on your hand. (Also, I was thinking about the coronavirus. It’s not so good to use bare hands to hold foods because we didn’t wash our hands.)

Pascal took the bag because of my advice. He said:

In Germany, it’s very normal now that people don’t take plastic bags; people use their own bags or at most use paper bags!

OMG I really felt ashamed because I should have brought reusable containers with me!! Maybe I should think about buying one reusable bag even though I really don’t like to buy silicone products~ (or do there anyone wanna give me some as a gift?😜😜😜😜😜)
After finishing the peanut ice cream wrap, he said ‘ There is nothing left on the bag; actually we don’t need this bag!’
Oh! I never thought about this; I should consider to take the wrap with my bare hands if my hands are clean!! I’ll try that next time!

The couch surfing host is in JiaoXi. When we started moving to the train station, Pascal asked me if I could help him with buying the ticket.

P: You are an angel!

P: People here are very nice. Even though don’t know the languages, they still try their best to help me.

N: Yes, it’s true! Taiwanese are very friendly, because we are Taiwanese!! (So proud!)

Pascal is just 23 years old (Oh gosh! So young!). He said I looked like 24 or 25 (Oh gosh! I was pleased haha), but based on our conversation, I mentioned I graduated several years ago, so he guessed I was older than 24 or 25. ‘But ages are just numbers. It doesn’t matter.’

N: That’s true!! I agree with you. The most important thing is attitude!

Sending Pascal to take the train, I returned home, turned on my laptop and made a card with Mandarin, pinyin and English to translate what he can’t eat especially he doesn’t like coriander at all!

Also sent him the links to vegan food map in DongMen night market and LuoDong night market. (Oh gosh, I should make an English website asap!)

P: You are amazing!

Looking at Pascal’s back, it reminded me of the time when I was an exchanged student in Germany and my spirit of being a backpacker seems just getting back!